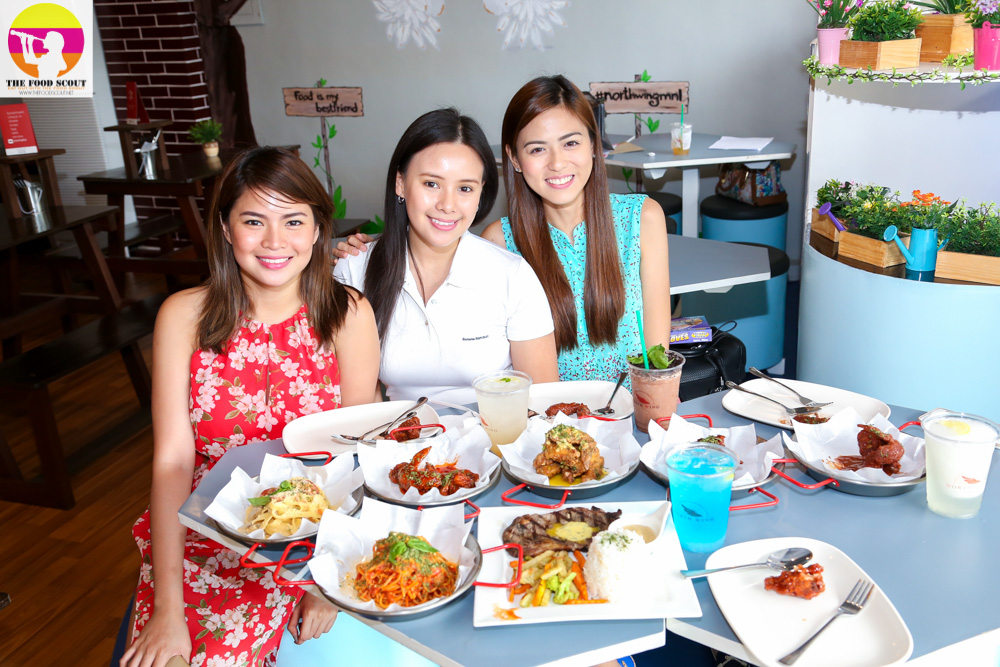 There will never be an end to my fixation with chicken wings. A fact I’m holding on to as long as I can chew, taste and digest. At the time I heard of the news a brand new restaurant specializing on chicken wings along Maginhawa, a popular food strip among young foodies, I wanted to teleport my vehicle along with O to this place called North Wing.
Only more than a month since it opened, I’ve been hearing positive feedback about North Wing’s food and ambiance. I’m not surprised the new restaurant drew the attention of Maginhawa crowd after finding out it is owned by GMA Artist Center’s Arianne Bautista and Louise Delos Reyes. With thousands and thousands of followers on their respective social media accounts, the word of their restaurant probably scattered all over the place.

My curiosity reigned and I had the opportunity to visit the newly opened North Wing more than 3 weeks of its operation. North Wing blends perfectly at the same time stands out among its neighbor competitors for its 3-in-1 concept – one mini food hall with 3 different eateries situated inside. Frequent visitors of Maginhawa, Louise and Arianne, know Maginhawa is a long strip of restaurants. But these ladies wouldn’t want to let go of your presence as they aim to cater an experience where everything your hungry belly craves for are already in one comfortable hub. As they dub it, North Wing is a one-stop shop for food trippers. If you’re with a group of 3 or more, there’s no need to debate over which restaurant to pick. North Wing’s 3 concept restaurant answers your craving for chicken wings, steak, pasta, pizza, and unconventional yet cooling beverages.

Let’s start off with North Wings, the flag carrier of the business. It is mainly concentrated on serving special chicken wings coated with rebellious flavors. To go side by side with your wings, a range of pasta and pizza are also offered.
Chicken Wings
6pcs – Php 180
12pcs – Php 250
24pcs – Php450
A personal favorite of Arianne, this Barbeque-flavored Wings capture the essence of how smoky and sweet your barbeque sauce should be. Distant from the spicy world, which is advantageous for those who prefer their chicken sweetly neat without the kick.
Changing the usual parmesan cheese to a cheddar burst instead, to flow flawlessly with an ample supply of garlic chops spattered around the wings. Garlic Cheddar Wings ranks as my top 2 next to the luscious Choco Flare Caramel Blaze.
Board on to the spicier wings after staying too close to mellow chicken wing flavors. Sweet Chili compromises to both sugary and piquant palate. A careful balance that attracts any hungry man.
Choco Flare Caramel Blaze Wings seems to prove that Maginhawa crowd is adventurous. A tally shows this flavor is one of the best-sellers. I don’t dare to disagree for it’s my top 1 flavor among the rest. The relationship of chocolate and chili ties a knot that’s meant for them to be inseparable. I tell you, it’s just fair to have an affair with this choice.
Whether you’re on the red team or the white team, North Wing had it covered for you. Louise Delos Reyes told me she wouldn’t mind going back for their Alaova Pasta, white-sauce based pasta mingled with sliced pepperoni.
Meanwhile, red sauce-based pasta like bolognese, rosotano, pasta chorizo, arrabiata, puttanesca, amatriciana, meatballs and pomodoro pasta are your other options if you want to skip this Alaova Pasta.
Chef Tim, one of the owners who acquired his culinary background from Le Cordon Bleu Australia, introduced Innkeeper Pizza as his personal favorite. Ingredients of his choice – onions, mushrooms, pepperoni and olives – are generously topped on this thin-crusted overly cheesy pizza.

From the flying North Wing, we now move on to the wild wild West Steaks. Straight to the point menu that pushes carnivores to take their daily dose of meat.
Probably the priciest of them all, Angus Ribeye served with mixed vegetables and gravy, seeks to satisfy the men in your group rather than depriving his appetite from light plates. You see, the char marks on the steak is an evidence your steak is grilled well according to your temperature preference. Next to Alalova Pasta, this one’s a staple choice of Louise.

Twist the angle to the other side of the mini food hall to appreciate what Sweet East has in store for you. All things sweet and pretty in a cup. Expect granitas (frozen dessert), beach-themed drinks, mocktails, sweet potted beverages and desserts in a cup to thrill you as you spend hours of catching up with your friends.

I dare you not to post an instagram photo of this Classic Pot, classic iced chocolate drink with crushed Oreos on top and a plant embellishment for a quirky illusion. It’s a given you will fail this dare. Even I couldn’t stop myself from being allured by this creative potted drink. My reflex will lead me to taking an angled shot and share the photo with my followers and friends. I shared with O but he seemed to forget it was meant to be shared, and not for his personal consumption alone. While finishing my slice of pizza, I glanced to my side to take a sip from the Classic Pot and the glass was only an inch left. Uhm, thanks O. 🙁

North Wing kept the atmosphere cheerful, relaxing and casual with different table and chair designs to choose from. Some include picnic-style benches with an illusion you’re outdoors, which makes a great place for hang-outs without the intimidation. Self-service system is also implemented where you’ll have the liberty to order from the 3 concepts like in a food hall.

To encourage you to put your phones down and face your companions, North Wing enforced a No WIFI zone. Posting and reading your friend’s updates could wait; concentrate on the one beside you.
Parking is not a problem. North Wing has enough and spacious parking slots.