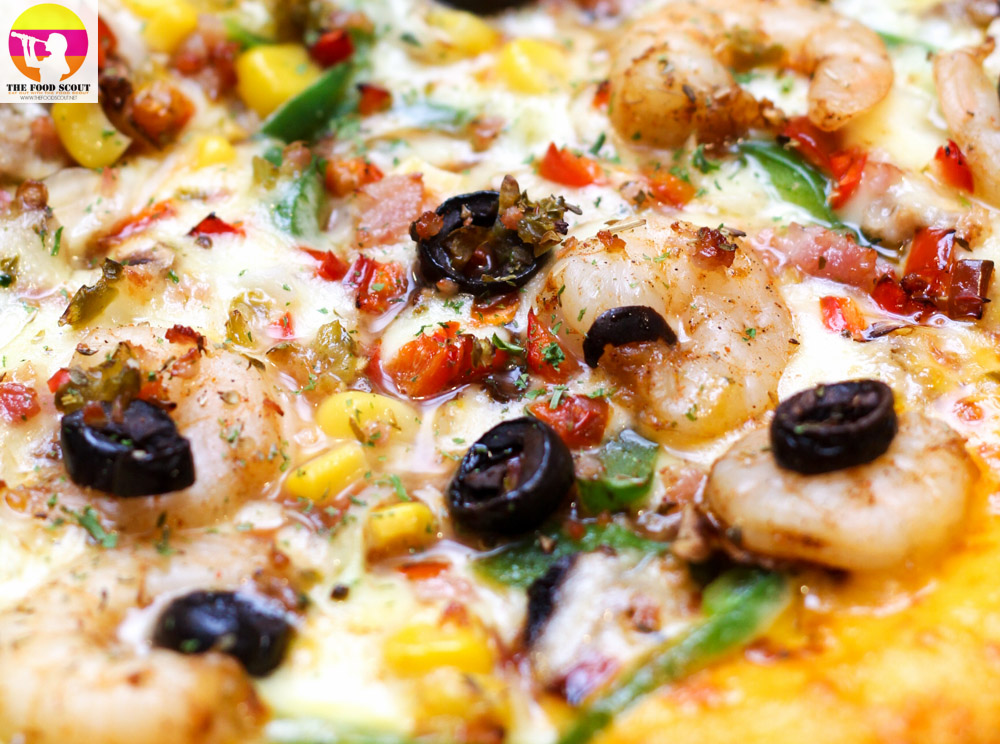 To all pizza freaks, K-Pop and Koreanovela fanatics and foodies reading this post, the no. 1 pizza chain in Korea is now in Manila! Mr. Pizza joins in the jungle of restaurants within the Ayala compound with a big bang. I witnessed the smashing grand opening of Mr. Pizza weeks ago as it occupied both the restaurant space and Greenbelt’s amphitheater for an eye-catching entertainment. Mr. Pizza knew how to define “grand” in grand opening!
Surprised? I’m not. More and more international franchise restaurants are coming in and all you have to do is wait… then fall in line. On the other hand, I agree it’s quite surprising to find out that this Korean restaurant doesn’t want to be in line with the typical and traditional Korean cuisine. Korean pizza? How does that work? I had similar questions in mind that lead me to curiosity. I wasn’t able to try Mr. Pizza during my recent Seoul Korea trip. Maybe because I chose traditional and authentic Korean restaurants over big branded names I stumble into.

Mr. Pizza gained its popularity, earning its way to the number 1 spot as Korea’s no. 1 pizza brand, from its women-targeted marketing campaigns. ‘Ladies first,’ the slogan of Mr. Pizza gave women customers more benefits, in terms of discounts and promos. The question for me is, will it be the same in the Philippines? Let’s wait and see. 🙂

Watching the pizza crew throw the doughs on air fired up the crowd to put out their cameras out and capture the energetic pizza show. Literally placed in the center of the establishment, everyone gets to watch the cool crew make pizza doughs fly on air.

Watch out for that sign “On Air.” That literally means pizzas are on air!

The 300% Principle of Mr. Pizza run the Korean world of pizza, aside from the Korean women who patronized the brand. Customer satisfaction was reached, thanks to following its 300% Principle. 100% freshly-prepared dough is used instead of frozen dough; 100% full-hearted topping is done as if planting rice in the field; and 100% grill-baked pizza is made without a single drop of oil. Sounds healthy right?

A first timer could be overwhelmed on where to begin and what to order. By browsing through the menu, every pizza looks worth giving a bite. Narrowing down on what to really order seems a challenge. Not only that, choosing from the range of crusts (egg tart, cheddarella, cream cheese, mocha bun, cheese cap and gold) adds another confusion. I didn’t know exactly what food words to tell the order taker, which is why I asked help from her to help me decide.
According to the server I talked to, Shrimp Gold is Mr. Pizza’s all-time favorite in Korea. Topped with whole shrimps seasoned with sweet and sour chili and Cajun spice, this is the premium choice in Mr. Pizza. For the crust, I experimented with Potato Gold crust. Listening to the server while repeating my order didn’t seem appropriate. Potato crust for my pizza? Totally weird! But who cares about the weirdness, Koreans love it so there’s no reason to wake up my conservative taste buds.

Hesitations were shrugged off after biting into the potato gold crust. That sweet potato edges swept me away. Chewy crust texture that’s went through an oil-free process. It was the darling of my Mr. Pizza night. Americans and Italians may know their pizza well. Koreans know more how to be playful and daring in blending ingredients to create beautiful flavors.
Fully-loaded with Korean-style Bulgogi charcoal-grilled beef, this Bulgogi Pizza won hearts of Filipinos who stick to the sweet side. Those who can’t cross the border of boldness in crazy mixture of flavors, this choice won’t cause any regrets.
At home, this Bulgogi Pizza was favored by the kids.

Expect your pizza to arrive at least 15 minutes after ordering. Following its 300% principle, there are no shortcuts in pizza preparation.
Sweet and tangy Ms. Chicken attracts women mad for wings. I’m talking about myself. Even in a pizza house, I couldn’t decline and turn away from chicken wings. Ms. Chicken may be overloaded with flavors but the size of each wing looks anorexic to me.
In this comfort food space, you can’t miss not having this Oven Baked Meat Spaghetti. Gooey cheese sitting pretty on top of meaty tomato-based spaghetti brings out the child in me. For the young or for the old, the spaghetti fits flawlessly. This and pizza could be enough to treat me for dinner.

Going back to the grand launch I mentioned earlier, Mr. Pizza Dream Team flew all the way from Korea to showcase their pizza exhibition skills. Free show for everyone in Greenbelt! K-Pop in another level through dancing while handling pizza doughs like a ball that doesn’t fall out of their hands.

Another brand on our watch-list is Korea’s Mr. Pizza. I’m quite eager to see how the Filipino market will accept this kind of concept in our country. It’s either a YAY or NAY.
For my adventurous side, I give it a YAY. I’d be interested to visit the store one more time to taste other crust and topping options on the menu.