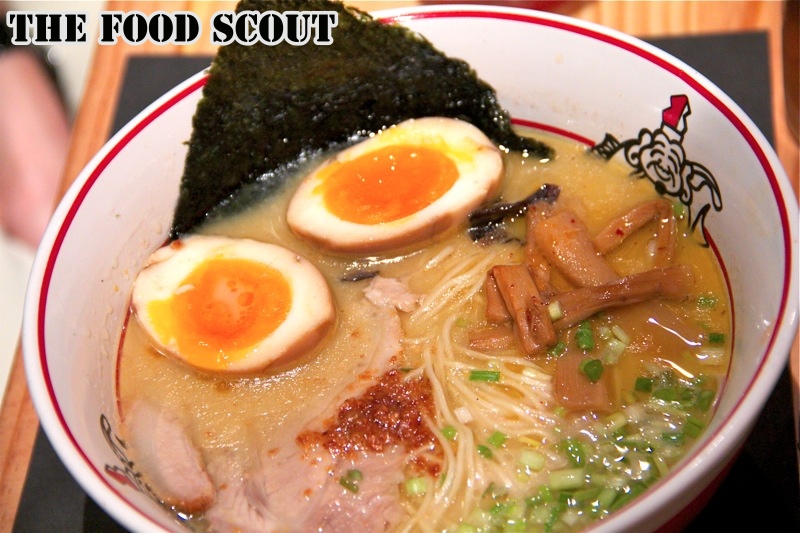 From east to west, left to right, people all over talk wildly over “what’s the best ramen?”. Oh it’s a non-stop topic if you bring up the what’s good food nowadays! I bet you want to ask me that as well, “Where’s the best ramen?”.
With all the ramen houses arising here in metro manila, choosing the best is becoming subjective. In almost every well-known district or mall, a ramen house is there to feed your Japanese noodles cravings. Well, actually, food is very subjective in general. I have my own opinion and you have your own take on what’s delicious or what’s not.
I’m talking about the shiz in ramen here. It’s a favorite discussion of foodies. Probably it’s undeniably the reason why I was compelled and challenged to spot if the new ramen house in Rockwell is competitive enough to be Manila’s hottest ramen house.
Ikkoryu Fukuoka Ramen is the newest ramen house in Rockwell and Shangri-la Mall that’s becoming the talk of the town. Originally  from Japan, this ramen house has been brought to the Philippines since the wise businessmen knew we will spend our cash on what’s hot in the food market, these Tonkotsu ramen.
First Tonkotsu ramen I tried was Ajitama Tonkotsu, topped with a special half-boiled egg fully marinated with a special blended soy sauce base. Tonkotsu is a type of ramen that has a thick broth made from pork. Mostly from their bones, fats and collagen, which you can get as you heat them for several hours.
What I love most about this ramen is the noodles and the half-boiled egg. Egg was perfectly cooked. Precisely what I wanted!
Ikkoryu Fukuoka Ramen is very proud of this special ramen called Black Garlic Tonkotsu. It has a very distinct taste, mainly because of its special roast garlic oil. Black Garlic Tonkotsu has their own market. I believe not everyone approves of this kind of garlicky taste of its soup, siding more on the stronger garlic flavor. Its chasu meat stands out, tender and garlicky as well.
Capturing a good photo of this Chasu Maki became a challenge to me. The plate itself looks very dry and flat. Concerning its style and flavor, it is somehow your Korean style food where you wrap your meat in lettuce. What’s wrong about this is that the size of meat is not proportional, which makes some meat appear larger than the lettuce wrap. Didn’t seem like a wrap anymore, but more of a sandwich-like appetizer. I wasn’t impressed with their Chasu Maki. A plain jane appetizer for those who opts for a healthy starter dish.
For 6 pieces, its price isn’t bad after all. Sulit na sulit for its taste. I’m not saying it’s their best bet but for a fine looking and decent serving of gyoza, you are getting value for your money.
If you know me, you know I yearn for anything green tea. It was a choice between sesame ice cream and green tea for me. Of course, green tea prevails. A couple of sticky rice balls and red bean paste were added to a single scoop of green tea ice cream. I think it was a right choice to add this dessert on the menu, similar to other Japanese restaurants. It cleans your palate after filling your tummies with a bowl of tonkotsu ramen.

Japanese characters all over the place adds art to the modern Japanese design of the restaurant. Looks sophisticated in an artsy way.

Ikkoryu Fukuoka Ramen has their own way of capturing the Filipino market through their distinct tonkotsu ramen. I think they’re not the typical ramen house you visit. Ramen flavors you choose from their menu will make you remember that only Ikkoryu Fukuoka has that type of ramen.
I can’t say it is the best but it is worth your time and money to try their ramen.

Manila, it’s raining from time to time and I think the best dish to have while the rain is pouring down is a bowl of ramen in front of you.
How about trying Ikkoryu Fukuoka Ramen this time?
Stay updated and Subscribe to The Food Scout for Free!
Pray, Eat and Love.
Cheers,
The Food Scout