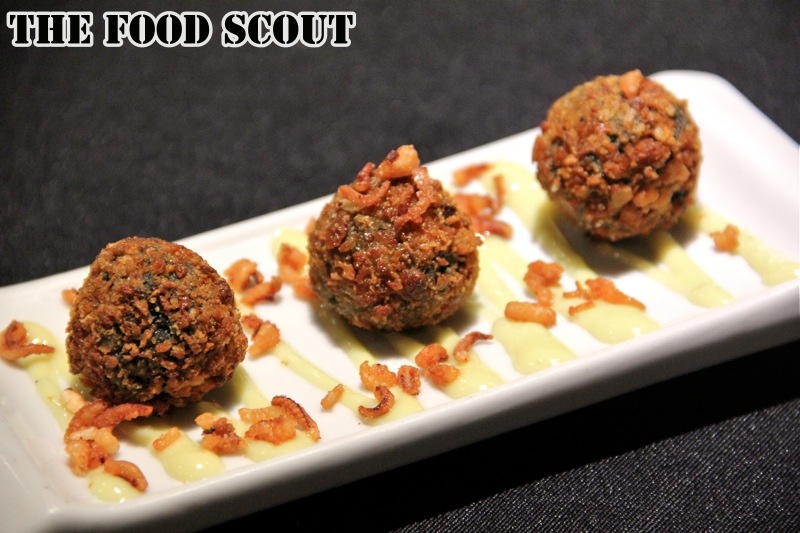 Our ‘abuelos’ and ‘abuelas’ (grandfathers and grandmothers) relate old Spanish food to their childhood. During their time, food in the country are not global yet compared to our generation now. Home-cooked foods were recipes they learned from ancestors or from their provinces, depending on where they grew up. Limited types of cuisine in their homes. Spanish food resembles itself to a classic cuisine in the Filipino culture. It was the “sosyal” and “in” food before. Now that we are more immersed into various cuisines from left to right, I’d say Spanish cuisine didn’t lose its demand in the Philippines. Until now, Spanish food is still known as a classic favorite passed from their generation to our generation.
My visit to Rastro backtracked me to what our grandparents used to eat much like Paella, a traditional family favorite. I love the fine presentation of every Spanish snack and main dish. I noticed a little tweak of 21st century way of cooking into classic Spanish cooking that worked to achieve the Spanish style Rastro is aiming for.

Who wouldn’t want those burnt edges of a traditional Spanish Paella Catalana? I always target grabbing a spoonful of burnt Paella portions. This Paella was pretty ‘ok’ for me. I couldn’t say great because the edges was not necessarily that burnt, as I was expecting. Also, I’d be wanting more seafoods mixed on my order.
Take one big bite into your mouth and expect a grungy look when you smile. 😀 The squid ink stains after every bite. It is one of my favorites at Rastro because of its twist of lime, seafoods and aioli sauce on top. However, I don’t recommend eating this during a meeting or your first date. Make it to a point you have a napkin right beside you to wipe off those black ink that stains your lips and teeth. Think twice before ordering Paella Negra.
Talk about texture with added flavor. Paella Negra stuffed inside these breaded crunchy balls, with squid and aioli sauce to top it off. I like the creativity of turning paella into tapas. Something your fingers can easily reach. A must-order at Rastro!

Didn’t know what was inside at first. My initial guess was some kind of dried fish, couldn’t distinguish which among local fishes it was until I found out it was tinapa. Tinapa Triangles pairs well with cream cheese and salsa. It’s not my favorite because I noticed the fried wrappers more than what’s inside.

Looks like simple fried sausages but it’s not. Na-ah! What I tasted are imported chorizo from Spain. A squeeze of garlic flavor in every nibble.
A full serving of Huevos Rancheros tapas on the picture above. Paper-thin potatoes and chunks of chorizos topped with egg and aioli sauce. The dish makes me remember tapsilog, a Filipino breakfast. Instead of beef tapa, chorizos are used. And instead of rice, potatoes are used. Seems like breakfast food to me, which I don’t mind having for dinner.

Chorizo, once again used, but now with Manchego, a Spanish cheese traditionally made with sheep’s milk. This kind of tapas is impossible to notice without Rastro’s tasty chorizo.

A party platter of tapas suggested for groups of diners. The presentation somehow looks odd to me. The empty spaces ruins the picture of its food presentation. If the plate was packed, with minimal spaces, I’d have my appetite for this platter.
A popular choice among my peers. The silky chocolate, including oreo crust and white chocolate layer tickled everyone’s taste for sweets. It captured our longing for dessert. The mango didn’t feel out of place as it compliments the layers of silky chocolate flavors. The fusion of all layers into one bite appease the entire Spanish tapas night.
Let’s cap off the night with sticks of Turones Pastor and we’re all good. Creme brule used as filling for the fried wrapper is another inventive way of eating Creme Brule. A remarkable dessert that takes an ordinary dessert to a higher level. I had more than 3 sticks (oops!). The light finishing touch of Turones Pastor brought my Rastro dinner to a good finale.

Sangria feels at home with Spanish tapas, and that’s certain. Aside from Sangria, Rastro has a long list of cocktails for you.

The men of the night found their own spots. Looks like they feel at home as they chill out at the 2nd floor lounge side of Rastro. With two floors that accommodates less than a hundred people, Rastro is more of an intimate restaurant with home-like Spanish ambiance to unwind.

Now, a better picture with Rina and Richie. 🙂 I had fun dining with you lovebirds! 🙂

Not a #selfie, but a double #coupling shot! My favorite shot of the night!!!! 🙂
For tapas and other Spanish delicacies, consider Rastro as your other option. It is not the best Spanish cuisine in town, but its accessibility, location, variety of choices and service may add up to your deciding factors of dining here or maybe going on a date here. Just be sure you think twice before ordering Paella Negra on dates.
Visit Rastro and please don’t hesitate to let me know what you think. 🙂
Stay updated and Subscribe to The Food Scout for Free!
Pray, Eat and Love.
Cheers,
The Food Scout