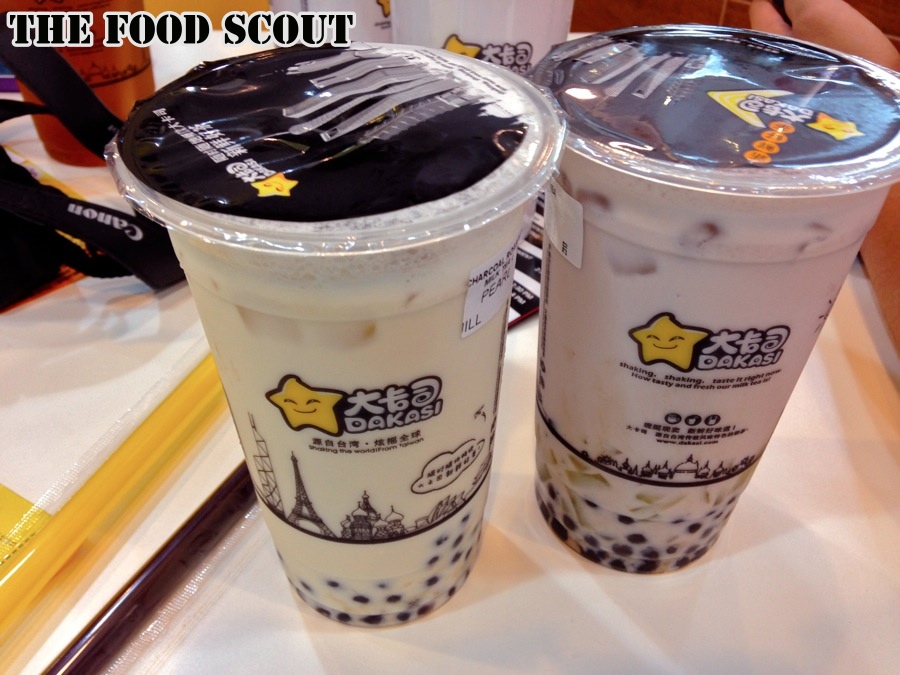 Milk Tea is generally one of the favorite drinks of this generation. If before, the choice leads to hanging out in a coffee shop. Now, the other option is to grab a drink and stay in a Milk Tea place. I am a confessed Tea-holic. But don’t get me wrong guys. It’s not because of the milk tea craze. I’m a tea-holic in general. Tea has been part of my everyday lifestyle since I learned how to drink house tea in Chinese restaurants. I drink one cup of hot tea either after lunch or at night before getting to my bed. Getting the chance to visit the new milk tea place in Makati gave me the hype to see what’s new and what’s good in there. So before my cousin’s kiddie party, I joined Dakasi Milk Tea’s event at Makati near Greenbelt.

Dakasi, founded in 1990, has over 400 stores in China alone, and is rapidly growing in Hong Kong, Malaysia, Thailand and Indonesia. Each one of these locations is guaranteed to deliver the same high quality of taste and freshness in every cup. February 14 2011, Valentine’s Day, Dakasi opened its first branch in Marquee Mall Pampanga, After the successful first branch, more stores were opened in Metro Manila and other key locations just a few months later. Today, there are already 17 branches all over the Philippines. I only discovered Dakasi when they opened their branch in Greenhills. It is a small kiosk that looks like a take-out counter.

At the event, I tried their Charcoal Roasted Milk Tea. The taste leans on the stronger side of tea. Dakasi Bubble Milk Tea is the usual drink I get from their Greenhills branch. Now, a new discovery for my new Dakasi favorite. Thank you to Liz of Dakasi who suggested this milk tea flavor.

On the other hand, Oliver tried their Taro Milk Tea. Chatime’s Taro Milk tea is his standard for this type of milk tea. Comparing Dakasi’s version from Chatime’s, Dakasi’s is lighter for the tummy. It is not that rich and thick though it tastes fairly good. I could finish one large cup of Dakasi’s, whereas I couldn’t even reach half a cup of Chatime’s.

We were asked to try more flavors and order any milk tea flavor we want. I was tempted to try other varieties but my stomach couldn’t handle anymore. Was that a sign for me to go back to Dakasi and try more flavors? Well…. I guess it is. The long menu of flavors makes me want to sip in every cup and taste all flavors.

Finger food cannot go wrong when milk is partnered. That afternoon, it was announced that adding food to their menu is Dakasi’s next project in line. We were given samples of snacks they will be adding on the menu. I got to try their sandwiches, nachos, cookies and chips. Fits the time of the day since we were there during merienda time.
Although I am not sure how they can add food in their Greenhills branch. The room is not that spacious to handle food inside the kitchen. Compared to their Makati branch, Makati has more seats and kitchen space to accommodate.

”Dakasi takes the health and well-being of its customers very seriously.”

Aldrich of Dakasi, who is also head for operations, demonstrated how milk tea is prepared at Dakasi. According to him, Dakasi makes their own ice and sugar.

Staff of Dakasi are well-trained, making sure that measurements are always accurate. The sugar, milk, and ice are weighed properly. Also, right temperature is key. In this way, your milk tea will not go wrong.
Dakasi uses a ‘shake machine’ instead of manually shaking your cup of milk tea. This makes the process faster and consistent as well. Aldrich explained how cleanliness is important to them. They don’t allow any jewelry to be worn while at the kitchen. The place must be kept neat and in order. Hearing him reiterating on that tells us how serious they are in maintaining Dakasi’s kitchen clean and green. I hope the staff follows this rule of thumb even though their bosses are not looking.

What makes Dakasi stand out from the rest of other milk tea brands? Their answer.. “It’s all about the taste”.
How long would it take for me to try all Dakasi flavors? Should I dare myself of not? Haha!

To find out what taste Dakasi is talking about, share me your verdict when you get to try Dakasi’s beverages.
Thank you Liz for making us feel welcome at the event.
Stay updated and Subscribe to The Food Scout for Free!
Pray, Eat and Love.
Cheers,
The Food Scout