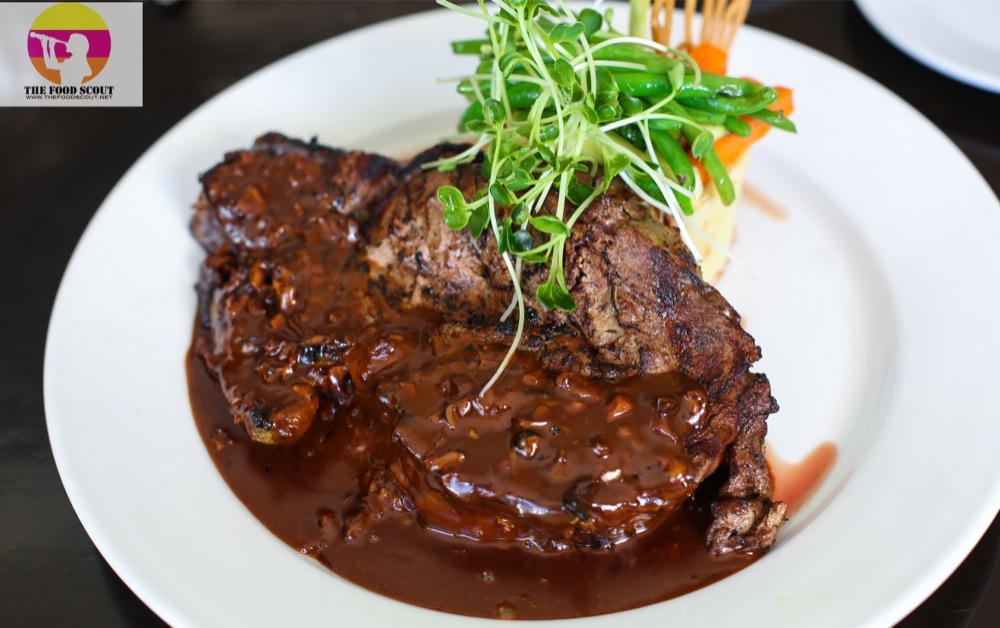 As far as I can remember, it was last 2013 when I heard of the restaurant Buenisimo by Cafe Ysabel in Quezon City. O’s achi have been planning and wanting to visit the restaurant owned by Chef Gene Gonzalez’ children, Chef Gino Gonzalez and Chef Gianina Gonzalez. We planned, planned and planned more but never pushed through from 2013 until the 3rd quarter of 2014. After a year of planning, our little wish to eat at Buenismo by Cafe Ysabel was made possible a few weeks ago. Hoorayyyy!
From my Spanish classes back in college, the term “Buenisimo” is used to describe something exceptionally or extremely good. For instance, you get to try your favorite ice cream flavor from a new brand.  The taste has a distinction from the rest that you have to say, “This is really really really good!” In one word, you could say “Buenisimo!” Such a strong word to use for a restaurant. The name itself thrilled me more!
“Buenisimo’s food is all about the nostalgic tastes, flavors and dishes my brother and I grew up with. Most of our comfort dishes were part of meals we used to eat at our famous Sunday family lunch in our ancestral home, says Chef Gianina.”
From the influence of their dad who is fearless in mixing odd flavors yet turning dishes to an exceptional one, Gino and Gianina followed his footsteps by incorporating flavors they’ve encountered from their travels around Asia and Europe yet still making sure the use of local ingredients for their modernized Buenisimo recipes.

The highlight of dining experiences usually happens in the middle part when the main dishes have been served. Buenisimo, like Cafe Ysabel, brought in the traditional Zatar Dip with flatbread, my personal favorite from Cafe Ysabel. I believe, I’m not alone in handpicking this as my favorite or let’s say my highlight for every visit at Cafe Ysabel. My mom, the woman who introduced me to Cafe Ysabel when I was still a little girl studying in OB Montessori, would often buy a bottle of Zatar Dip for our home.

When I open the fridge and see a stock of Zatar Dip, I would take out my coins and ask our maid to buy me bread from the nearest bakery store. You could just imagine my eyes sparkling when I was served with my favorite Zatar Dip with flatbread. I had to control my appetite and save some for the next dishes in line.
Composed of merguez and chorizo de bilbao drizzled with balsamic syrup and guava confit for a sweeter blend.
You can’t refuse the smell of truffle lingering your nose. Once it’s there, you wouldn’t want to stop yourself from indulging. Bed of white sauce topped with truffle bits, organic mozzarella, and additional truffle oil for a blazing treat of truffle. Buenisimo’s Truffle Pizza saved me from my pizza cravings for the entire week.

I almost forgot to take a good shot of the pizza from the way it tempted me to grab a slice immediately.
The modern Spanish restaurant welcomes the kids in the family with their Carbonara Lucia. Wealthy amount of cream and cheese with sous vide egg and crunchy bacon wafer to keep the kids focus on their own plate. Its thick cream cheese will zip your kids from talking and chew instead.
Paella, synonymous when I catch the words Spanish food, is a pre-requisite to say you’ve dined in a Spanish restaurant. Saffron, mixed seafood, chorizo, chicken, vegetables and rice all served fresh and hot on a cast iron skillet. Buenisimo took the classic way of preparing paella, giving us what we expect in this traditional Valencian rice dish.
Sharing a steak is not as simple as it sounds if you’re meticulous on the degree of your steak temperature. Luckily, the four of us, O, Jenny, Eric and I, were on the same plane of having our steak medium (or medium rare) cooked. We couldn’t say more words about describing our steak while in the zone of being pacified by Buenisimo’s Galician Steak.
The Gonzalez chefs finds a way to put class in all dishes they cook. Take a look at this Banana Tatin and how they turned the banana dessert into a dazzling piece of plate. Torched banana, banana ricotta, caramel and chocolate sauce with vanilla ice cream. A playful combination of textures and flavors. Hot crunchy bread with smooth texture of banana side by side with a scoop of cold vanilla ice cream gently melting down.
You don’t want to leave the signature Buenisimo Shake behind. A refreshment of mango, passion fruit and mint to cool your hot-tempered head after a crazy day of working to earn for a living. 😉

Mixing modern minimalist and classic antique style of Cafe Ysabel into one space was made possible. Natural light coming from the huge windows cheerfully brightened the ambiance. Speaking as a food blogger, this is exactly the light I need for all my food shots.

The sunlight turned out to be strong, heating our bodies already that we had to request for the blinds to be pulled down.

Buenisimo has their own parking spaces outside the establishment but not enough to accommodate all cars on during a full-house schedule. During peak hours, the guard would assist you to park by the streets nearby.

TWG Tea Celebrates 2 Years with You!