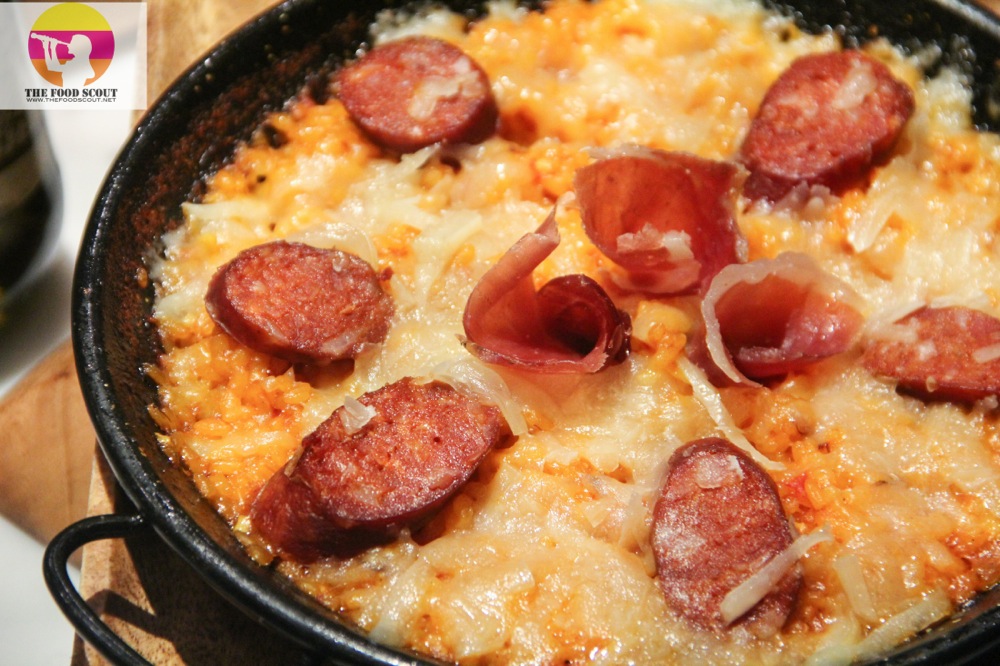 May 20, 2014, the day a Michelin starred restaurant called Tim Ho Wan opened its glass doors, was also the day I went to Megamall for the Mega Food Tour.

4 hours and 15 restaurants, the record I cannot forget. A memorable experience of being able to hop from one restaurant to another for only 4 hours. That was from 7pm until closing time. Can you believe that??? I’ve never imagined myself to run the amazing race of eating. The Mega Food Tour, in partnership with Anton Diaz of Our Awesome Planet and The Mercato Centrale Group, went all out to give us the ultimate foodie experience in one night. This is like eating crazily like there’s no tomorrow!
I won’t keep you any longer. Let me share with you a glimpse of my night under the roof of the new wing of Megamall, the Mega Fashion Hall.

Starting the tour with a familiar cinnamon snack from Cinnabon.

To pace myself, I didn’t finish the whole cinnamon anymore. A little piece was enough and I placed it in my bag to keep my tummy light at the start. The technique here is Pacing.

Artisanal Italian gelato hit my sweet spot, my heart for ice cream. Bono Artisanal Gelato stands out from its competitors by giving emphasis on using the finest and freshest ingredients from all over the world. Their gelato is made fresh daily without pastes, flavorings, artificial colorings or preservatives.

I tried the Dark Chocolate with real brownies, Mango Sake and Ube with Cubed Ube Chunks.
Don’t be surprised if you can’t get these flavors the following week. Bono Gelato flavors are seasonal, really depends on the fresh ingredients available .

Foodies all over the world is insanely in love with Baked Buns with BBQ Pork. If you haven’t tried these bunds, get a piece and you’ll understand why. For me, it’s the magic of the bun itself. The soft crusty and flaky bun that’s so light; it swims with goodness of BBQ Pork in my mouth making me feel like a child as I shout, More, More and More! A magical bun that you can’t simply put into words why you’re so in love with it. I guess it’s a love affair with these baked buns!
There’s so much in one dumpling! Chopped peanuts took it out of the ordinary dumplings we eat. I enjoyed how it is compact with various meat and flavors inside using a very thin dumpling paper.
My seatmates, including O, were so into this Glutinous Rice with Lotus Leaf or Lo Mai Gai (Chinese). They love the freshness of its rice and the stickiness that made it very Southern Asian. It’s like eating our filipino “suman” with meat wrapped inside.
My best Prawn Dumpling or Hakaw in the Philippines so far! Just like how I fell in love with the Pork Buns, my tastebuds can’t be separated from how this fresh Prawn Dumplings filled me with happiness in every bite. Now I’m understanding why Tim Ho Wan deserved that precious Michelin Star.

One of the largest Korean fried chicken in the world is also in Megamall, make waves for Kyochon! Started in 1991, the Korean food chain promises to deliver specialized chicken, differentiated chicken and high-quality chicken.

Chez Karine, a French patisserie inspired by American and Asian flavors.
A quick stop at Chez Karine to taste they macarons and dessert jars.

Muscovado Pudding had me at first look with the cute dessert jar. This gives me an idea on what to buy for those I love. 🙂

The French Baker emphasized its name by opening a new kind of establishment, Salon De The.
The elegance and the dim yellow lights fits perfectly a short Tea Time at the salon.

The Tea Set included various pastries from Salon De The. My favorites are the Chicken Lollipops, Quiche and Dark Chocolates.

Gigi Gaerlan’s Custaroonery is one of the reasons my sugar level shoot up for a while. Custaroonery’s delicious combination of smooth and creamy custard flan topped with a chewy buttery crust kept me raving about this to my family.

My fingers kept me reaching out for more. And nobody, even O, couldn’t stop me from indulging.

The chic and classy packaging is perfect for gifts – gift to your friend’s occasion, or simply gift to yourself. A reward after a week of working your way to earn those numbers in your bank account.

The World’s Number 1 Gyoza is in Megamall as well. Osaka Ohsho, a franchise from Japan, brought in the famous Gyoza that will change your standards. The juicy meat wrapped in soft dimsum skin graces you with nothing but pleasure. The tagging of being the world’s top dimsum is not a hoax. See and taste it for yourself!

The open kitchen with Spanish chefs inside Boqueria added value to the restaurant. As I entered Boqueria, I watched the chefs prepare the paella that was going to be served to our long table.
To be honest, I didn’t receive positive feedbacks about Boqueria before heading to the establishment. I couldn’t give a statement on what I think unless I try Boqueria’s specialties, including Paella Queso Manchego. The taste of Paella Queso Manchego is far from the negative comments I’ve heard. Absolutely a paella that’s taking you away from the traditional standard but creating a new level of mixture with its Manchego cheese and homemade chorizo. The combination is artistically classy!
Boqueria is also proud of their Churros with Chocolate dip, which I took home instead, since we were all in a hurry for the next restaurant stop. Remember, we have 15 all in all! We gotta get moving! 🙂

Please congratulate us… We have reached our 10th stop! Abe is not a new name for those who admire Filipino cuisine as it is one of LJC’s restaurants. The name Abe is dedicated to the father of Larry Cruz. The newly opened branch in Megamall reaches out to this area to serve Filipino cuisine with a strong Capampangan twist.
We were advised not to obsess over this Tamarind Shake as it may lose our appetite for more dishes to come. I had to be warned, or else… I’ll lose myself finishing one tall glass of it.
Even if I said “No to Rice” from the start of our Mega Food tour, I had to go against it when I saw my bowl of Lamb Adobo.

The ultimate burger joint I’ve been wanting to try for so long, 8 Cuts Burger Blends!!

Why 8 Cuts? The name was derived from the 8 types of beef used to make interesting burger blends – Chuck, Rib Eye, Short Rib, Sirloin, Brisket, Hanger, Flank and Ox Tail.
We tried 5 custom blended burgers – The House Blend, The Beef Bomb, The Ox Blend, The Big Game and The Steak Cut. Each blends has that distinct taste but our favorites are The Big Game (blend of Hanger and Brisket) and The Ox Blend (blend of Flank, Ox Tail and Rib Eye).

An award-winning Chinese restaurant, Lugang Cafe, joined the restaurants that opened at the Mega Fashion Hall.

Known for their Pork Xiao Long Bao, how could I reject the restaurant that serves this special dim sum. I was still in the mood for more Xiao Long Bao even if it was our 12th stop already.

To keep us relaxed after rounds of walking and eating, Lugang Cafe served us their Traditional Arabian Coffee.

A 10-minute luxurious buffet at the newest branch of Vikings. More than 200+ dishes to choose from, I think 10 minutes could be enough as this was the 13th Mega stop.

Like a true Viking, we explored the SM Megamall branch and discovered the Art Museum theme of emphasizing the idea that every dish created by their chefs is a work of art or “masterpiece”.

An extensive selection of “made from scratch” baked breads caught my appetite for Lucca Bakery.

A piece of this bun I took home to my family greeted them with a sweet morning surprise when they woke up.
That’s it, pancit! The 15th and last stop! WHEW! My happy and chubby tummy conquered the Mega Food Tour!!! Thank you Lord for giving me this large appetite! 🙂

The magical dates to remember are May 30 and June 6.
2 food tour dates for you to join. Are you curious how much it costs?
Unfortunately, any price isn’t right to join the tour. Fortunately, if you get chosen, you get to fill your day with 15 restaurants All for Free!

HOW TO JOIN the Mega Food Tour?

1) Put out your camera phone and take a photo of yourself with a dish from any of the restaurants I mentioned above. Choose the best foodie pic!
2) Upload the photo on Instagram, include the location and tag the following – @smmegamall and #MegaFoodTour
3) SM will randomly choose 20 lucky winners to join each food tour.
Are you on Instagram? Then what are you waiting for?
This is your chance to try 15 restaurants from SM Mega Fashion Hall in 4 hours!!!
Stay updated and Subscribe to The Food Scout for Free!
Pray, Eat and Love.
Cheers,
The Food Scout

Travel China – The Streets of Shanghai